COLUMBUS, OH – The USWNT took on Sweden at MAPFRE Stadium on Thursday night for an international friendly and their second to last matchup of 2019. The USWNT is now geared up and ready to focus on prepping for the Olympic qualifying tournament in early 2020. New Head coach, Vlatko Andonovski, has taken over the USWNT after they said their farewells to former coach Jill Ellis in October. This is the first game for Andonovski as the new coach as he coached his first training session this week in Columbus. USWNT put on a stellar performance, as always, and defeated Sweden 3-2.

As soon as the match started, it was apparent that USA was still operating at full speed since their 2019 World Cup victory. Just 6 minutes into play, Carli Lloyd (10) found the back of the net after an assist from Christen Press (23). USA didn’t slow down after that first goal, though. At 28’, Press found the back of the net herself, locking in her 50th international goal with the assist from Lindsey Horan (9).

Just minutes later at 31’, Lloyd hammered another one home after Tobin Heath (17) took a beating to get her the assist, putting USA up 3-0 over Sweden. Lloyd, who is also the team captain, is the highest active goal scorer in U.S. history. The only players ahead of Lloyd in goal scoring are Mia Hamm, Abby Wambach and Christine Lilly, who are currently all retired.

The second half of the match was a much more slow and steady pace but USA maintained possession for the majority of the half and spent much of the time putting Sweden’s defense to work. At 61’, Andonovski decided to give some starters a rest but Mallory Pugh (2) entering the match for Heath and Samantha Mewis (3) in for Cincinnati native, Rose Lavelle (16).

USA was unfortunately unable to earn a shutout with Sweden’s Anna Anvegård (19) at 75’ . Anvegård found the goal again at 79’ for a second Sweden goal. Lloyd had an opportunity to increase the lead with a penalty kick late in the half but missed and sent the ball over the goal.

USA had a very strong performance despite missing some key players from their roster. Alex Morgan recently announced that she is pregnant with her first child and will be taking this time to focus on her pregnancy and plans to return to the team in 2020 for the Summer Olympics in Tokyo. Kelley O’Hara, Ali Krieger, Megan Rapinoe, Crystal Dunn and Tierna Davidson are all out with injuries and currently rehabbing to get healthy for the Olympic qualifiers.

In a post-match press conference, Andonovski stated that he was overall pleased with his team and their performance; however, he wasn’t thrilled with giving up two goals and they would continue to work on how to prevent that in the future.

The USWNT will travel to Jacksonville, FL on November 10 to take on Costa Rica for the final match of what has been an absolutely epic year for USA. 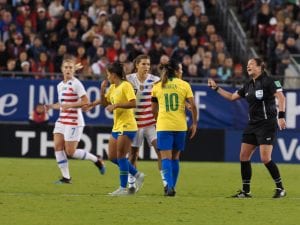 Written by Adrian Beecher After an early goal in the 20th minute from Tobin Heath, the United States Women’s National Team was able to hold