The 2020 Virginia Tech football campaign was a microcosm of the college football landscape itself. The team experienced the highs of dominant wins against North Carolina State and in-state rival Virginia and the lows of numerous postponements early in the season, and the late-game debacle at home against Liberty.

During his media availability at the 2021 ACC Football Kickoff in Charlotte, Fuente referenced a meeting with Hokies athletic director Whit Babcock, “Whit, you didn’t bring me here for these past two years, you brought me here for what we’re about to go through. We were not in good shape. We were in the process of building facilities. We had some issues on our roster that were going to take time to get through.”

The athletic program took on several building projects on campus, including an immaculate athlete nutrition center and new dorms. The staff had the unenviable task of presenting this incomplete vision to recruits, donors, and other key personnel while knowing they faced a challenging and lengthy roster rebuild. “We were not in good shape,” Fuente stated.

Sentiment among factions of Hokie Nation rapidly deteriorated, and it seemed as though hope was lost for Fuente’s future at Virginia Tech. There were difficult losses to Wake Forest, Liberty, and a heartbreaker against Miami, compounded by tough times from previous years made for a tenable situation. Fuente received a public endorsement at a press conference from Babcock in December, and the Virginia Tech Athletic Department presented a new capital campaign to the community in April.

In Fuente’s words, “We’re rolling.” The facility upgrades are complete, coaching staff tweaks have been made, recruiting is at an all-time high for Fuente and Co. at Virginia Tech, and the excitement of fall camp is right around the corner.

Virginia Tech is 4-1 in season openers under Fuente’s leadership. However, they will need an outstanding performance to defeat a highly touted North Carolina Tar Heels team on Friday, September 3rd, in Blacksburg. The Tar Heels return Heisman candidate quarterback Sam Howell and a more experienced offensive line. UNC’s offense will feature a new running back corps and wide receivers stepping into more prominent roles for the Heels.

Braxton Burmeister is penciled into the starting quarterback role following an outstanding performance in the season finale against Virginia and the departure of Hendon Hooker to Tennessee. Connor Blumrick transferred in from Texas A&M during the offseason and will compete with Knox Kadum for the backup role.

For the Virginia Tech offense to have any chance at success in 2021, it is imperative that Burmeister stays healthy and becomes a more consistent passer than he was in 2020. His impact in the ground game is well documented, but until he proves that he is a threat in the passing game opposing defenses will be able to key on designed quarterback runs and option plays without fearing the deep ball.

Supremely talented Kansas transfer Khalil Herbert departed for the NFL’s Chicago Bears, leaving a massive void for the Hokies to fill. Jalen Holston will have the first opportunity to show what he learned as Herbert’s understudy last season and to show the potential the coaching staff knows he has. Marco Lee, Raheem Blacksheer, Keshawn King, and potentially true freshman Kenji Christian should see some action in the backfield.

Wide receivers Tré Turner and Tayvion Robinson accompanied by tight end James Mitchell will be critical components of the Hokies offense. Changa Hodge, Da’Wain Lofton, Jaylen Jones, and Jaden Payoute also figure to play essential roles in the Hokies’ passing game from the wideout spot. At the same time, Nick Gallo has a chance to compete for opportunities at tight end. The unit is talented and has the potential to be the best pass-catching contingent in the conference.

With first-round draft pick Christian Darrisaw no longer anchoring the left side of the line and losing Doug Nester and Bryan Hudson to the transfer portal, there are questions regarding the stability of the Hokies’ offensive line. Offensive line coach Vance Vice, a noted tinkerer, will be creative during fall camp constructing the group responsible for protecting Burmeister and opening holes for the backs. Luke Tenuta, Silas Dzansi, Brock Hoffman, Lecitus Smith, Jesse Hanson, JUCO transfer Bob Schick, and Maryland transfer Johnny Jordan should play prominent roles. However, the exact composition of the unit will be in flux well into the regular season.

There’s no other way to put it. There are massive questions regarding the Hokies’ defensive line, especially at defensive end. Justus Reed did not return to the program; Alec Bryant and Robert Wooten have since transferred since the end of the season. Furthermore, Emmanuel Belmar’s status for fall camp is in doubt following concussion issues that are carrying over from last season.

Amaré Barno will be the featured pass rusher on the line and could be a first-round pick in the 2022 NFL Draft. Additionally, Jaylen Griffin figures to be a key component as well. Wilfried Pene will move from tight end to defensive end to mitigate the losses the unit endured. True freshmen Mattheus Carroll and Cole Nelson will have opportunities to contribute immediately. However, the prospect of relying on true freshmen to be impact players right off the bat is dangerous.

Defensive tackle is undoubtedly the more powerful position on the line. Clemson transfer and Virginia Beach native Jordan Williams is an extraordinarily talented and much-needed newcomer. Norell Pollard, Mario Kendricks, and Josh Fuga are talented contributors and can be relied upon to anchor this unit.

Dax Hollifield and Keshon Artis will get the majority of opportunities at middle linebacker. While Alan Tisdale, Marshall transfer CJ McCray, and Lakeem Rudolph will get reps at outside linebacker. Dean Ferguson has a considerable amount of potential at middle linebacker following his redshirt year and will likely earn reps during the season. Newcomers Jaden Keller and Will Johnson will also look to establish themselves during fall camp and contribute where they can.

Keonta Jenkins returns and has an opportunity to emerge as an impact player for the Hokies while Devin Taylor aims to boost potential NFL Draft stock. Former four-star recruit Devon Hunter returns to the program following his dismissal last year, and Vanderbilt transfer Tae Daley is a welcome addition to the unit. While the exact configuration of the safety group is yet to be determined, the talent is unquestionably there.

The cornerback contingent at Virginia Tech is a bona fide strength of the team. Chamarri Conner will lead the Hokies secondary from the nickel spot while donning the No. 1 jersey. Jermaine Waller, Armani Chatman, Brion Murray, and Dorian Strong will return and are more than capable of producing at a high level for the defense. True freshman DJ Harvey will have a chance to be an impact player early on. Fortunately, he likely won’t have to be heavily relied upon so early and slowly progress. Highly touted cornerbacks coach Ryan Smith has a lot of talent on his hands and will undoubtedly be a hot commodity in the coaching carousel following the season.

The Hokies will have certain position groups that are exceptionally strong and others that will present more questions than answers throughout the season. However, the schedule is weak overall. The Hokies road contest at West Virginia in the Battle for the Black Diamond Trophy is their only road game until the day before Halloween.

For Virginia Tech, we’ll know where they are by then. Fuente is 4-1 in openers as the Hokies head coach, and his team will need to turn in an outstanding performance on both sides of the ball if they wish to defeat a highly touted North Carolina squad. Middle Tennessee State and Richmond will need to be taken as seriously as any opponent on the schedule but present opportunities for tweaks and growth. Notre Dame presents a massive midseason test, and Lane Stadium is sure to be rocking for that matchup. Finishing with four out of five conference games on the road is a daunting task, but if the Hokies can build momentum and confidence in their team early, they will have a chance to achieve their goals for the season. If not, it’s likely a majority of Hokie Nation will be clamoring for a regime change.

Ultimately, the success, or lack thereof, will come down to Burmeister’s play and getting pressure on the opposing quarterback. Burmeister will have to show significant improvement in the passing game and have to stay healthy. The defense steadily showed signs of improvement down the stretch last year despite being completely burned out and exhausted by the time their lone bye week appeared. This team soldiered through a myriad of adversity and negativity last season and has a chance to show what they’re truly made of this year. 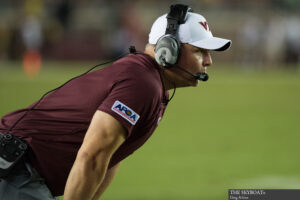 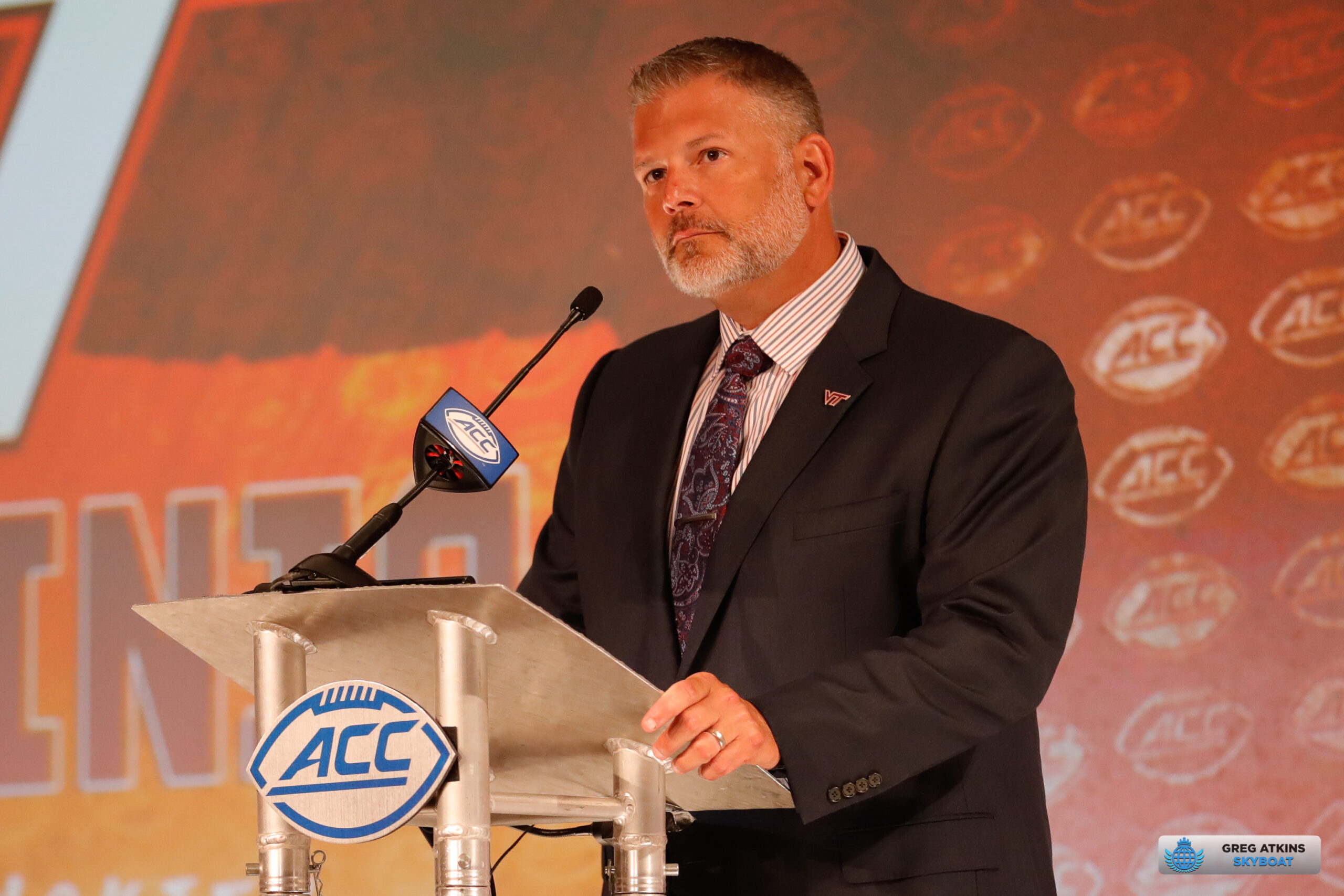 It has felt like an eternity since Hokie Nation was welcomed back in full to Lane Stadium in many ways. On Friday night, that changes. 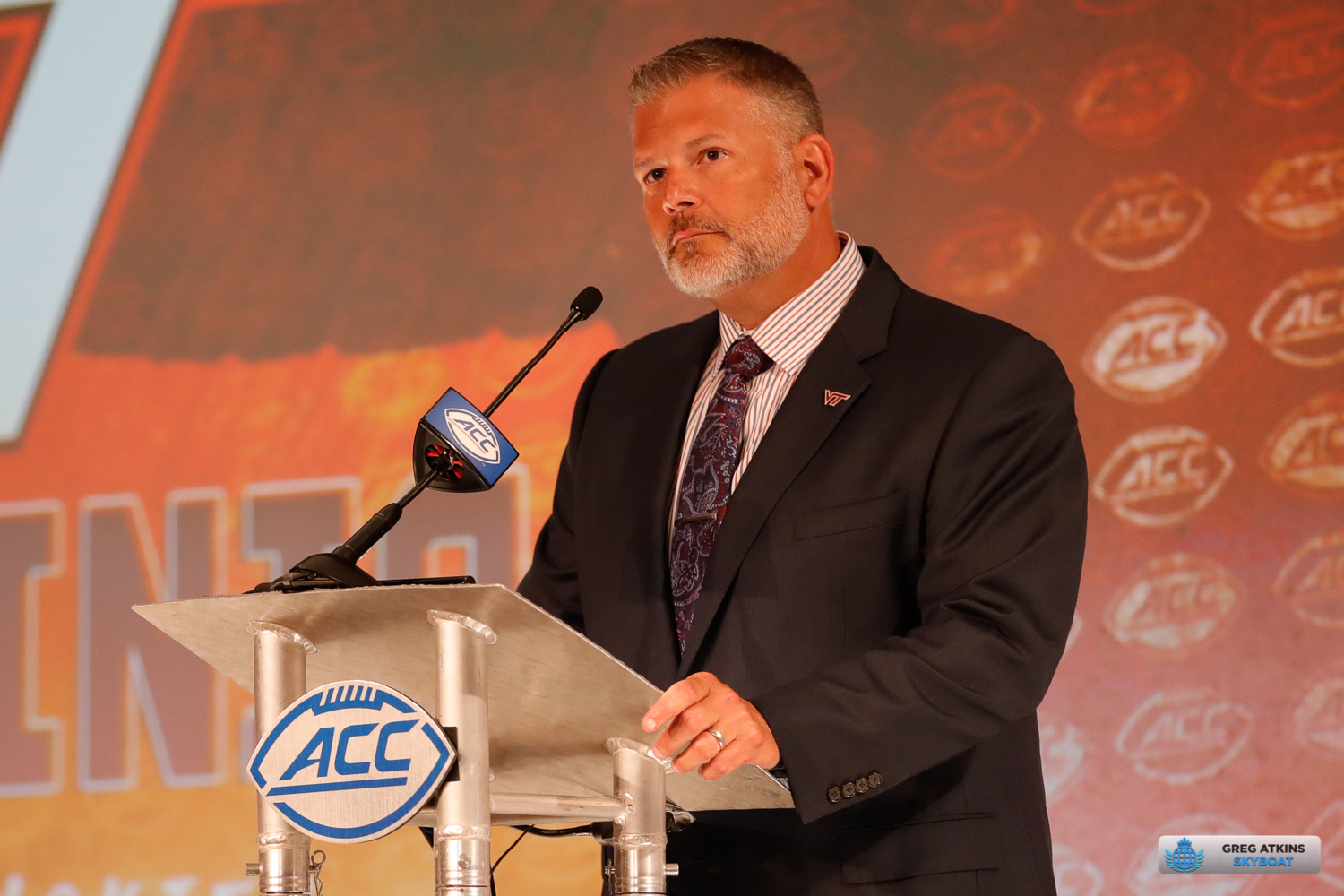