HOMESTEAD, Fla. – As the sun rises in the east on the coast of South Florida, there is a sense of excitement rising with the start the day. A rookie driver awakes, realizing that by days end, their first season in the NASCAR Gander Outdoors Truck Series will culminate.
There were ups and downs in the driver’s opening season. They grabbed a first career top 15 out West at a track that the driver had never raced at. Since that time though, there has been more for them to desire.

Now with six top 17’s in their 18 races so far this season, the journey comes to Homestead-Miami Speedway. Where champions will be crowned and dreams will be realized.

The driver doesn’t sit in a position to grab a title in their first year, no. However, their dream, is very much so being realized. Years and years of training, the tens of thousands of laps on the Go-Kart track. The tears, the joy. The ups, the downs. At the end of the day, they get to take the green flag on Championship Weekend. That’s not even the best part of the dream the driver will realize on Friday night though.
After announcing in late September that she had worked to overcome Juvenile Rheumatoid Arthritis, Natalie Decker had a dream for change.
After being diagnosed with rheumatoid arthritis at the age of 2, she’s heard all the negative talk. Natalie turned a blind eye to those that told her the ailment would keep her from chasing her dreams. To her that was an unacceptable answer to the way she wanted her life to play out.
She worked hard, went to physical therapy daily, and started to take the journey one step at a time. As time went by, treatments came and went. The pain, like the beat of your heart, was continuous with brief breaks.
Over time those breaks of silence from pain have become longer. However, the mornings where she is unable to initially bend her arms and legs still occur. Still though, she’s her now and living the dream. For her, it was time to take a stand for those that suffer the way she did.

Being part of a force to bring awareness to arthritis was always in the back of her mind.

When the sun sets on the coast of California and the brilliant colors of the South Florida sky transition to midnight black. When the lights go off for the last time of 2019 in the truck garage. She will have realized being that force she desired to become.
With a full Arthritis Foundation paint scheme for the race, Natalie is racing for hope. A Thursday afternoon in the NASCAR truck garage at Homestead with 40+ South Florida juvenile arthritis affected family and friends invited by the Arthritis Foundation. A silent auction of race worn and autographed gear on her website until Sunday night. All proceeds going to help fund camps to provide hope for the over 300,000 kids in the US currently affected by the condition.
Natalie’s passion to help others, combined with her social influence, was a perfect combo for impact. As she helped raise up kids to autograph the rear deck lid on her No. 54 Arthritis Foundation DGR-Crosley Toyota Tundra, it was clear to see where her true happiness lies. Racing and making a difference.
The trolls and doubters will always conduct their ceremonious chuckle from their fingertips. And the sun will still rise in the East and set in the West. Meanwhile, all in the same, Natalie will continue to race, and work for impact in the community.
At the end of the day, there is something truly harmonious and mesmerizing about a person who is able to realize, chase and achieve their goals and dreams, right? It’s something we all desire, and hope to accomplish each day. We consistently look for examples of those that have accomplished what we desire.
Be sure to tune in Friday on FS1 as the sun sets, dreams are realized and new ones are imagined, at Homestead Miami-Speedway. 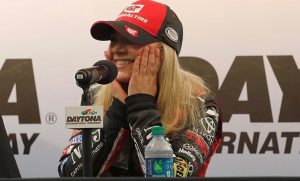 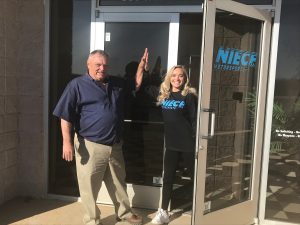 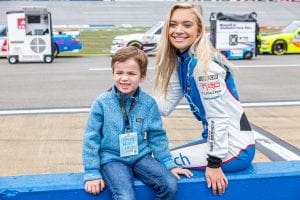 Natalie Decker Communications MOORESVILLE, NC – (Oct. 31st, 2019) –We are still Green as the race to raise awareness and funds for the Arthritis Foundation