Season Finale of Game Of Thrones Comes To Fitting End

As the finale of Game of Thrones starts you see a horrified Tyrion see what has become of Kings Landing and the Red Keep.  Knowing and also helping Jamie try to free Cersei from an impending doom, Tyrion heads straight to the dungeon where the heads of fallen dragons are placed only to find his brother and sister both crushed by the red bricks of the Red Keep; which is sort of befitting considering how hard both of them wanted to keep Kings Landing and the Red Keep for themselves.

It can also be said in a weird way that it was fitting considering the relationship that both Jamie and Cersei had.  Moments later Tyrion hears Dany’s plans for conquest in the Seven Kingdoms after naming Grey Worm the commander of her Army.  She mentioned that she is going to “liberate” and “free” the people of Westeros just like she has done to so many other cities in Essos on her conquest to Westeros.  As she speaks to the Dothraki and Unsullied she mentions that she will “free” Kingdoms like Winterfell, which is where we all know by now the Stark family rules.  This is the moment that Tyrion sees the madness of Dany and refutes the title of being the hand of the king and in dramatic fashion throws the pin and walks away

Many were left disappointed with how Game of Thrones ended, but if you truly followed the way the last couple of seasons were going the ending really was not that shocking.  If you followed the subtle hints that Arya was not the one to rule, because she wanted to travel and keep training possibly as a an assassin.  Sansa had no intentions of relinquishing the North to anyone as she truly is the Queen of the North. The Stark family, a proud and honorable family, were the defenders of the North; they defended and guarded the “Wall”  for as long as Westeros records have been kept.  After everything that Sansa was put through you can see in her face she has become the woman whom her father, Eddard Stark, never wanted her to be but she overcame many adversities and has proven to be a competent leader and ruler.

The fate of Dany and Jon we all saw coming. One of them must die and with Dany having a dragon you would think it might be her, but lets not forget that Targaryens are unable to be burned, meaning she simply can not just “dracarys” Jon out of existence.  As the two embrace each other with Jon telling her she will always be his queen, Jon does what we all knew would happen considering that this is the series finale.  Drogon, Dany’s dragon, mad at his “mother” being killed destroyed the Iron throne, giving a bit of closure that now the new kingdoms will not be ruled by an uncomfortable chair made from swords.  As Drogon flies away with Dany in his claws it is my belief that he will go back to Old Valyria, where the Targaryen bloodline was created.  With all this happening it leaves a giant hole in the Seven Kingdoms that must be addressed.  Who will rule over Westeros?

People may be upset with the Game of Thrones series ending where Bran ends up as the King of the Six Kingdoms, after giving Sansa complete control of her own Kingdom, the North.  This leaves many of the other kingdoms without leaders. As I predicted in last weeks article there were many options to how the now Six Kingdoms will be broken up.  Tyrion, still being a Lannister and with the Lannisters motto being “A Lannister always repays his debts,” holds true by allowing Bronn to rule Highgarden.  As for who rules over the rest of these lands, now we see Sam Tarly in control of The Reach, Edmure Tully is in control of the Isles and Rivers, Robin Arryn rules the Vale as their family has since the beginning, Yara Greyjoy is now the ruler of the Iron Island and Gendry Baratheon is the ruler of Stormlands.  An unnamed man is seemingly the ruler of Dorne, which might be a piece for HBO to continue with their spinoff series they are planning. It is at this council that Tyrion arranged that they all vote to have Bran be King of the now Six Kingdoms.  The idea of voting for who will rule over all the different kingdoms in some ways is a great idea but in other ways could go horribly wrong, but for the moment it seems to be the best thing for the newly formed Six Kingdoms.

While everything is being settled, we see that Jon heads back past Winterfell wearing the Nights Watch Black cloak, meeting up with two old friends.  One being Tormund Giantsbane and Jon’s trusted and loved dire wolf Ghost.  That moment made me, and I’m sure all animal lovers, happy as can be; considering all the fans were furious about Jon leaving Ghost without saying goodbye. If you think about it, Jon knew they would take Kings Landing and The Red Keep so he knew he would see his trusted companion still.

The big question that is on my mind is this, is this really how “The Song of Ice and Fire” is to end?  We wont know until the writer of the books, George R.R. Martin, whom this show is based off of completes the next installment which addresses these stories.  We as fans have been patiently awaiting the forthcoming books titled “The Winds of Winter” and “A Dream of Spring”.  For all we know the last season we just watched could be mostly fan fiction with sprinkles of what really happens.  Many will miss the series but knowing that there are two more installments of books makes all the true fans of the series happy.  Thank you HBO, David Benioff, D.B. Weiss and of course Mr. Martin for giving us eight seasons and seventy three episodes of some of the best television of our generation.

For more Game of Thrones and other Entertainment news, follow us here! 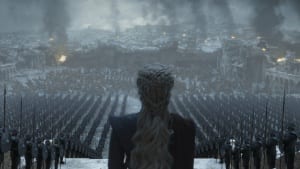 Written by Robert Henry After the beheading of Missandei and her’s last words being “dracarys”, Daenerys knew what she needed to do in order to