The 2020-2021 AFC Championship game in Kansas City, Missouri showcases an expected host in the reigning Super Bowl Champions, the Kansas City Chiefs, and a new challenger, whose strength has put the NFL on notice, the Buffalo Bills.

Patrick Mahomes is no stranger to the spotlight as of recently. He may only be in season No. 4 as a professional quarterback, but his resume is longer than most players’ career achievements.

His mobility paired with his arm strength makes him just as dangerous outside the pocket as he is inside, but his football IQ and chemistry with teammates give him a unique edge.

The offensive weapons at Mahomes’ disposal force opposing defenses to work that much harder.

Tight end Travis Kelce ranks second in the NFL when it comes to receiving yards, beating out some of the league’s best wide receivers. The top target for Mahomes is a large-bodied, strong pass catcher that requires attention from defenses.

However, if too much attention is given to Kelce, then Tyreek Hill will likely be free to run go routes most of the game, and it’s highly unlikely the Bills have a member of their secondary that can keep up with Hill. Not to mention Mecole Hardman and Sammy Watkins are viable options and threats to add yards to any drive.

Clyde Edwards-Helaire, the rookie out of LSU, has made his presence known for the team but recently has been sidelined due to injuries.

The Buffalo offense was one of the strongest in the NFL, and it was headlined with arguably the strongest arm in the league with a young and ‘on the rise’ Josh Allen.

Allen, who some are advocating for MVP, swept the AFC East and led the Bills to their first divisional championship since 1995. Allen, in his third season, is having the best year of his young career in all categories.

The run game for the Bills is nearly nonexistent, as Zack Moss is now out for the remainder of the season and Devin Singletary has not been the most effective running back.

Relying on the passing game is not an issue for Buffalo, as they hold claim to the league leader in receiving yards and receptions, Stefon Diggs, in his first season with the franchise.

While Diggs poses a large threat to the Chiefs defense, he is not the only weapon from Buffalo capable of doing damage.

After spending seven seasons in Dallas, Cole Beasley is having the best season of his nine-year career and has risen back into league-wide relevancy as a solid second option for Allen.

This matchup will be an interesting one to watch, considering what happened the last time the two teams met.

Back in October, during the regular season, the Bills were handed their second loss of the season by the Chiefs in a contest that ended with a score of 26-17 in Buffalo.

Allen’s offense was bottled up. He was only able to throw for 122 yards and two touchdowns, along with a single interception. Diggs was held to only six catches for 46 yards and a touchdown.

The Bills defense was incapable of stopping Kansas City’s attacks through the air, or on the ground.

Mahomes completed 21 of 26 passing attempts for 225 yards and two touchdowns. Edwards-Helaire easily moved the ball down the field as he racked up 161 yards on 26 carries.

There’s a clear favorite in the Chiefs, but the Bills have improved greatly since that mid-October contest. It’s clear that if Buffalo wants to advance to the Super Bowl and seek out their first championship as a franchise, they’ll need to step up the defense as much as possible. 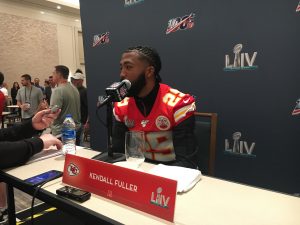 MIAMI, Fla. – Erik Slaby reviews the third day of media Availability with the Kansas City Chiefs. He touches specifically on the defense and their