HOUSTON – The Astros were looking to get their first home victory since their home opener against the Angels on April 18th. As for the red-hot Blue Jays, they were  looking for the sweep after defeating the Astros in the first two games of the series by a score of one run each.

As for the Astros, injuries and a lack of offense have plagued them so far. The Astros pitching so far has been good, so can they put up some hits/runs or will the Blue Jays break out the brooms for a  sweep?

Houston Astros pitcher Luis Garcia took the mound today against Toronto Blue Jays pitcher Yusei Kikuchi. In the first inning, both pitchers did not give up a home run. In the second the Astros would strike first taking 2-0 lead over the Blue Jays thanks to Yusei giving up three walks and an infield base hit by rookie hitter Jeremy Peña.

In the fourth inning, former Astro George Springer hit a single and was brought home on a Guerrero Jr. sacrifice fly to right field to make the score 2-1 in favor of the Astros. The Astros would respond in the bottom of the 4th when veteran left hand hitter Michael Bradley would hit a two-run homer to right field to take a 4-1 lead. The Blue Jays, being the comeback team they are, would respond again when Lourdes Gurriel Jr. would hit his first home run of the season in left field making 4-2.

Astros hitter Yuli Gurriel, Gurriel Jr. ‘s older brother, would start the bottom of the 5th with a double deep to left field, then would score on error. The Astros up 5-2 seemed to be in control until the top of the 6th when the Blue Jay catcher Zack Collins would tie the game with a three-run homer to right field.

When the Astros got the lead the Blue Jays would come right back. Like in the previous two games, Toronto would once again come back and took a one-run lead on Blue Jays’ batter Santiago Espinal doubled deep center that brought in Raimel Tapia to make it 6-5.

The game went back and forth just like it has been all series long, the Astros looked like they were on the verge of getting swept for the first time this season. However, the Astros once again responded again when Yuli Gurriel doubled to left field and Diaz would then bring him in with a single also in left field that tied the ball game 6-6. No other players scored in nine innings in which the game would be extra innings. The Astros are 0-1 in extra innings this season, while the Blue Jays have not had one this season.

In the extra innings both teams start with a man on second.  Top of the 10th inning the Blue Jays’ fierce hitter Guerrero Jr. was walked and Gurriel Jr. hit a double into deep left field bringing Guerrero to make it 7-6 and that’s all they would get.

In the bottom of the 10th, with a man on second for the Astros, Peña would have his first walk-off home run of his career, to center field to win the game for the Houston Astros 8-7 in extra innings.

The win for the Astros ended their four game losing streak and ended the Blue Jays’ four-game winning streak. Peña ended Blue Jays closer Jordan Romano’s 31-game consecutive save streak and is the first to do it since Brian Boguservic hit a walk-off against the Chicago Cubs back in 2011.

The Astros are now 7-8 on the season and third place in the AL West. They will travel to Arlington to take on the last place Texas Rangers in the first four game Lone Star Series of the season.

The Toronto Blue Jays are 10-6 on the season tied with the New York Yankees in the AL East and will return home to start a three game series against the Boston Red Sox. 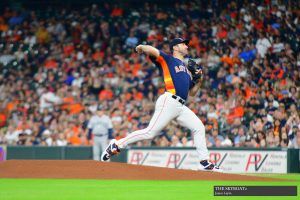 HOUSTON, TX – This past week for the Houston Astros Organization could not have gone any better. They make a huge splash in trade deadline

Arlington, TX – The All-Star break is over, and this past weekend it was time for the Houston Astros and the Texas Rangers to get 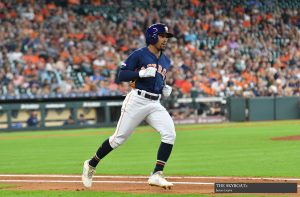 Denver, CO – The Houston Astros took the victory in the first game of a 2-game series against the Rockies in Colorado. In a back