NEW ORLEANS – What Joe Burrow accomplishes Monday night at the Superdome is the type of thing that Hollywood directors work decades to plan out and design. Though, here, it was a real as real could get.

60 passing touchdowns on the season, an NCAA single-season record. 463 passing yards in the LSU 42-25 win over Clemson, an NCAA record for passing yards in a Title game. The kid accounted for six total TD’s , a CFP National Title record, along with the passing TD record with 5.

Taking into account that Burrow took two final knees inside the Clemson 10 yard line to seal the Championship win. Simply stated, the numbers could have been even more impressive if it had, in fact, been necessary for Burrow to force his will upon the defending champion Tigers of Dabo Swinney.

With a chip on his should ever since entering college and not getting an offer from his dad’s alma mater, Nebraska, the kid’s destiny was fueled by doubters. Without the offer he truly wanted, he signed at Ohio State, his home town team.

While in Columbus, Burrow would watch from the sidelines as they lost to Clemson in the 2016 CFP Semifinal at the Fiesta Bowl in a 31-0 drub session. Back then he was a third-stringer, unproven, and lacking the true support of coaching staff to mesh into the starting roll it seemed.

So on May 20th of 2018, Burrow made a choice to transfer to LSU as they named Ed Orgeron head coach. Burrow would then be named the starter as a redshirt junior, and he made it clear, on the field of play was where Joe belonged, not on the sidelines.

Burrow led LSU to a 10-3 record in 2018, as they earned a spot in the Fiesta Bowl against an undefeated UCF, who was on a 25 game winning streak, having claimed a national title the previous year.

Then came the game-changer moment for the gunslinger from Ohio. On a 3rd down and 8, in the 1st quarter Burrow threw a pass that was picked off, and as he went to make a tackle against his pass oppressor, Nate Evans lit up Burrow, with a good collection of the crowd letting out a gasp as Burrow laid their gasping for air on the turf with LSU trailing 7-3.

It was at that moment, that he had a choice to make. Succumb to the pain and let it override his dream, or push that to the side and get up for his Tiger brothers, his family. He chose the ladder and got up as he inhaled and exhaled deeply, collecting himself.

Joe would lead the Tigers to a 40-32 win over UCF, handing the Knights first loss in 25 games.

Flash forward to Monday night, with Burrow leading the attack against undefeated and defending National Champion Clemson. It was final Giant that Burrow would attempt to slay in the season, having already defeated the likes of Alabama, Auburn, and Georgia, before laying waste to Oklahoma in the semifinal in Atlanta.

It was the last step of the journey for him, having already won the Heisman trophy in record fashion, winning 90.7% of the first-place votes. One could already assume, his fire for success, and as he looked at the few first-place votes he didn’t get and used that as his motivation to showcase his skills furthermore, to show those voters they made a mistake.

It wasn’t all sunshine as things got started. In fact, LSU was unable to get anything going offensively early on, and Clemson struck first. This was after two straight punts by each team on the four opening possessions of the game.

Burrow put LSU into the end zone on their 4th possession after three punts to start the game. He did so on a 52-yard pass to Ja’Marr Chase, who snagged the pass at the 10-yard line in stride and jogged into the end zone for the tie with under 3 minutes left in the 1st QT.

Clemson retaliated with a CFP National Title record-long 52-yard field goal and a 36 Tee Higgins TD run off a pitch, as the defending champs took a 17-7 lead with just over 10 min left in the 2nd QT.

Then Burrow turned it on… On LSU’s first play from scrimmage after the Clemson TD, Burrow connected again with Chase, this time for 16 yards, then went right back to him for 56 yards. This setup a 1st and goal and would end with Burrows lone rushing TD of the game.

After a Clemson Punt, it was again, Burrow to Chase for the TD, as LSU went up 21-17 with 5:19 left to play in the half. Burrow finished off the half with a 6 yard TD pass to Thaddeus Moss that made it 28-17 as the teams went into the locker room.

In the 2nd half, it didn’t start as coach O had planned out in his head. Clemson’s defense stood up to Burrow and LSU, forcing three and outs on their first two opening possessions. In between, Clemson struck back with a Travis Etienne TD and a 2pt conversion time cut the deficit to 28-25. However, that was the end of the cheers for the Clemson faithful.

After a quick first down on the Clemson ensuing possession, LSU forced a punt. Burrow led his Tigers on a 6-play drive, capping it off with a second TD pass to Moss with 5:13 left in the 3rd.

Clemson’s offense would then be shut down for the rest of the game, accumulating only 51 more yards of total offense. Burrow would throw one more TD, connecting with Terrance Marshall Jr, for 24 yards, pushing their score to 42-25.

Trevor Lawrence would take things into his own hands on Clemson’s final offensive play of the game. It came with a 12-yard run, which ended in a forced fumble by Grant Delpit, which was recovered by LSU with 3:53 remaining in the game.

Burrow and his Tigers would milk the clock, as they still worked their way down the field and into a goal to go situation. After getting inside the 4-yard line, Burrow would release the attack on Clemson and take two final kneel-downs, solidifying LSU’s National Title in a 42-25 final.

Though, for Burrow, it wasn’t about the accolades, the numbers, or the MVP title. It was about the family of LSU, the teamwork they had to get where they had come. Not just the players or coaches, as he hoisted the trophy, he told ESPN’s Reece Davis on the stage to the crowd still gathered celebrating, it was the cooks, the teachers, the bus drivers, and went on and on, making it clear it was a family win for LSU.

It was a performance of a lifetime and dream way to end his collegiate career at LSU. He wrapped things up grate with a final solidifying statement. “You know, I think what we did tonight can’t be taken away from us.,” said Burrow, “I don’t know about the whole hero thing, but I know this National Championship will be remembered for a long time in Louisiana. To do it in New Orleans is even more special. This is going to be remembered for a long time.” 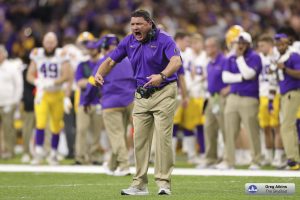 The end of Saturday’s LSU-Florida game played out a lot like Taylor Swift’s new album – it was unexpected, dramatic, atmospheric, and celebrated the emotions 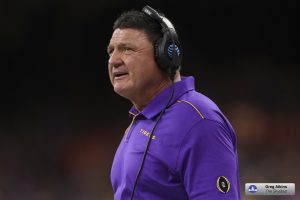 LSU Heads To Missouri Looking To Stay Perfect On the Road

In a game that was initially scheduled at Baton Rouge has now been moved to Faurot Field in Columbia, Missouri as the 17th ranked LSU

LSU Bounces Back with Win over Vanderbilt

The 20th ranked LSU Tigers (1-1) are back on track after dropping a stunner last week to Mississippi State. They went on the road this