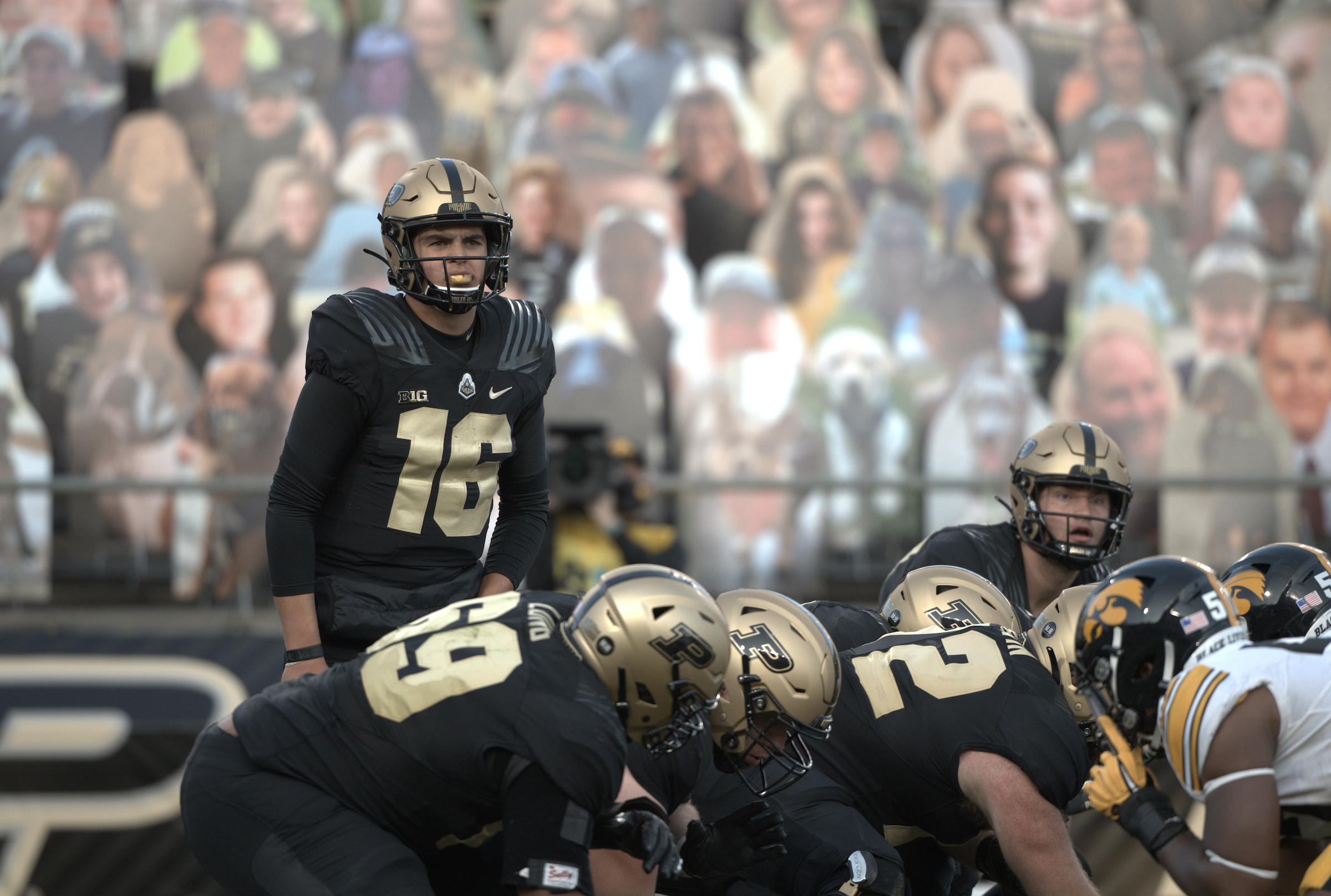 WEST LAFAYETTE, IN – Purdue quarterback Aidan O’Connell overcame a few mistakes to lead the Boilermakers to their first season-opening win since 2016, as they defeated Iowa 24-20 on Saturday, October 24th at Ross-Ade Stadium.

The Boilermaker defense started off the 2020 season with a quick three-and-out. Then on the offensive side of the ball, O’Connell completed his two first passes, combining for a total of only five yards. Enough to get the juices flowing, just not enough to get the chains moving, as they were forced to punt after a three and out of their own.

On the opening play of the Hawkeyes second drive, Spencer Petras tried to hit a home run with a deep ball down the field to Brandon Smith. However, Petras overshot Smith by about five yards.  Two more incompletions followed as the Boilermakers forced a second three-and-out.

O’Connell then got in the zone, completing 5 of 6 passes on the drive for 56 yards. He capped the drive off on a 9-yard TD pass to David Bell in the endzone. This made it 7-0 with 7:07 left in the 1st quarter.

The rest of the 1st was quiet, and then things kicked back up in the 2nd quarter. On the Hawkeyes opening possession of the 2nd, Petras led his squad on a quick five-play 35-yard drive.  He capped it off with a one-yard QB keeper for a TD score.

Then after the Boilers second three and out of the game, Iowa struck yet again. This time on a methodical 11-play 73-yard drive that was capped off on a 1 yard TD rush from Sargent. This made it 14-7 Hawkeyes with 4:42 left in the half.

The Boilermakers would answer back, though, as O’Connell went five of seven, passing for 54 yards. He capped off the drive with an 11-yard TD pass to Bell to tie things up at 14 with 1:40 left to play.

The Hawkeyes would punt on their ensuing possession, as it looked as if things would head to the half in a 14-all tie. However, O’Connell would be intercepted on the Boilers’ final drive of the half by Matt Hankins.

The turnover gave Iowa the ball 1st and ten at their own 36-yard line with 31 seconds left in the half. Then Petras got to work swiftly and quickly. After a six-yard pass to Tyler Goodson and a 28-yard connection with Nico Ragaini, the Hawkeyes were threatening at the Boiler 30-yard line with 19 seconds.

Petras came out of the timeout and connected with Sam LaPorta for 20 yards, setting up a 1st and goal. Though, Purdue would hold them to a field goal as Duncan knocked through one for Iowa from 27 yards out.

This sent the Hawkeyes into the locker room with a 17-14 lead at the half.

On the Boilers’ opening drive of the 2nd half, O’Connell had the team rolling like a steam engine down the line. However, like a train entering Grand Central Station, all the momentum came to a halt. The reason being, on a 2nd and ten from the 11-yard line, O’Connell was picked off by Barrington Wade.

The Hawkeyes wouldn’t be able to capitalize on the turnover, however.  The Boilermaker defense stood tall and forced a punt near midfield. Things would remain pretty calm until near the end of the 3rd quarter.

On the Hawkeyes final drive of the 3rd quarter, they would get things rolling quick with runs of 6 and 12 yards from Mehi Sargent. This put Iowa into Boilermaker territory as things rolled into the 4th quarter.

A holding call would push Iowa beyond the 20 and fizzle their drive out after getting into the red zone. They were forced to settle for a 33 yard Keith Duncan field goal. This pushed the Iowa lead to 20-14 with 13:12 left to play in regulation.

Then it was Purdue’s turn to get to work. After an incompletion to start the drive, O’Connell got hot. He connected with Wright for 15 yards, then with Durham for 12, and then went back to Wright twice for completions of 20 and 5 yards.

By this time, Purdue was set up with a 2nd and five at the Iowas 31-yard line. The Boilers would soon face a 4th and one at the Hawkeye 27, in which they handed it off to Zander Horvath, who picked up the 1st down.

They would hand it off to Horvath consecutively three more times. However, the drive would soon stall out at the Iowa 12 yard line, as they settled for a 29 yard J.D. Dellinger field goal. This made it 20-17 Iowa with 8:20 left to play.

Despite cutting the deficit, time wasn’t on the boiler side, and the defense was starting to show fatigue. Sargent took control of the rock for the Hawkeyes with a 21-yard carry to push the ball into Purdue territory with time ticking down.

However, two plays later, Sargent would lose control of the ball on a carry, as Dedrick Mackey forced it out, and Cam Allen jumped on it for the Boilers. This gave Purdue new life, and a chance to make a comeback.

With six minutes left to play, O’Connell took the snap under center from the Purdue 28 yard line. His first pass was incomplete to Maliq Carr. However, after a five-yard run from Horvath and a 10-yard completion from O’Connell to Bell, things started to roll.

Horvath tacked on a nine-yard run to push the ball into Iowa territory. Three plays later, Purdue was faced with faced a 1st and 10 at the Hawkeye 37 yard line and O’Connell took a sack.

However, a facemask penalty on Jack Heflin of Iowa would push the ball to the 22-yard line. Five plays later, O’Connell found David Bell in the back of the endzone with plenty of social distancing between him and the Iowa defenders.

This put the Boilermakers up 24-20 with 2:15 left to play, putting all the pressure on the Hawkeyes. Petras looked poised for the task on the drive’s first play as he connected with Sam LaPorta for 16 yards, pushing the ball to their 44-yard line.

However, four straight incompletions would follow that pass from Petras, including the final pass that was defended by Geovanté Howard for the Boilers.

This sealed the game for Purdue and earned them their first season-opening win since 2016. Horvath finished the game with 129-yards on 21 carries. Bell finished with 13 catches for 121 yards, his 7th career game with over 100 yards receiving, and has only ever played in 13 games at Purdue.

O’Connell was on a roller coaster that mostly saw him in tune and locked in, completing 31 of 50 passes for 282 yards and three TD passes all going to Bell. However, he did have the two interceptions, which he acknowledged and broke down after the game.

“Mental errors, I would say.” Explained O’Connell. “The first interception I was just trying to force something up the seam, in that two-minute situation. I’ve got to find another person to throw it to, find a check-down or just throw it away. So, I was disappointed in myself at that mistake. Then the second one, was more so physical. It was a bad throw, I threw it hot and behind Payne, and that was my fault. I’m really not too impressed with how I played tonight, I’m disappointed in myself, but just really happy for my teammates and the team because we came out with a win.”

The Boilermakers will now shift their focus to the road, where they will have a matchup in Champaign, against Illinois on October 31st. Then they will head to Madison for a showdown with the Badgers on November 7th, before heading back to Ross-Ade Stadium on November 14th against Northwestern. 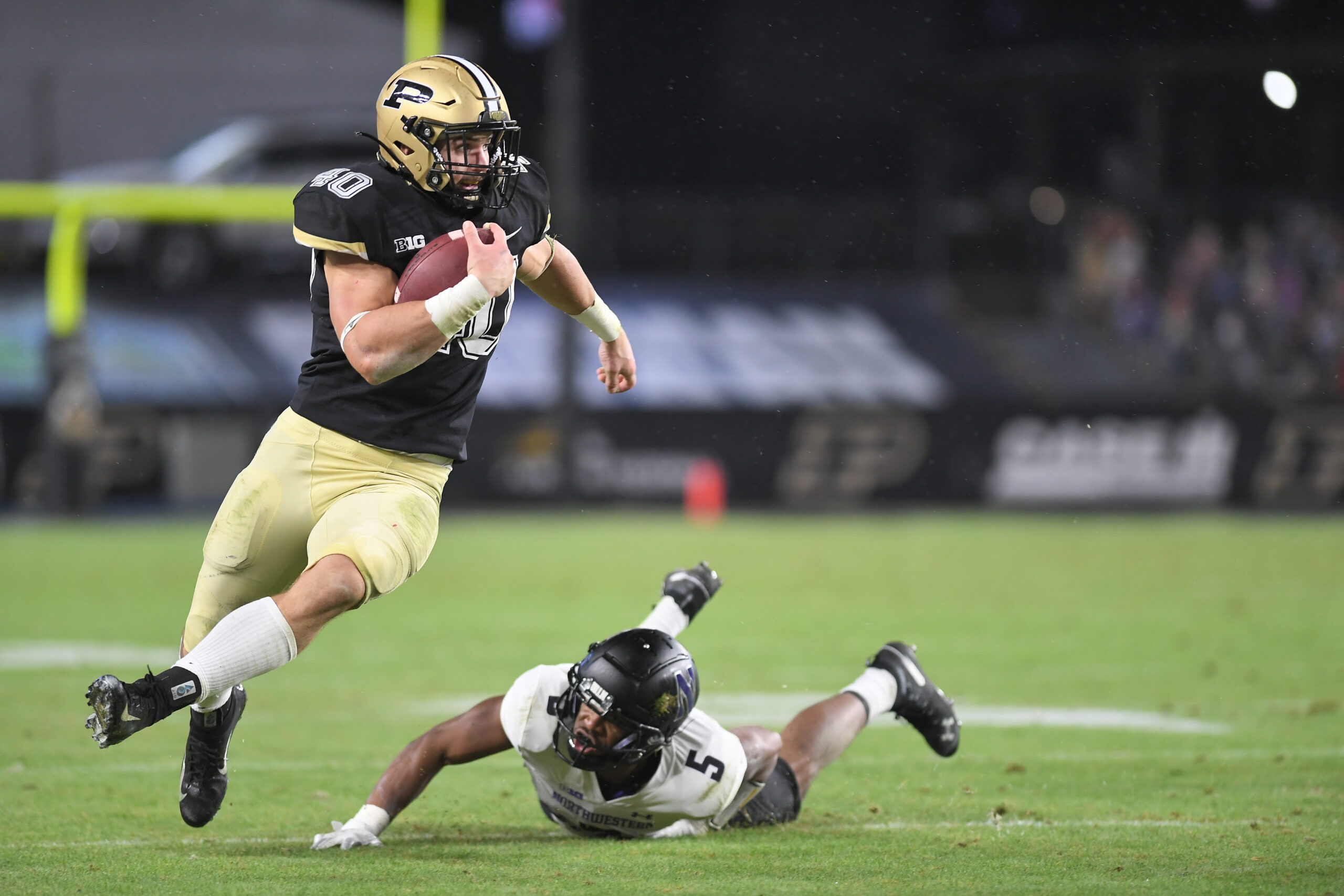 Boilers Focused On Improving Offensive Efficiency Ahead of Minnesota Matchup

Purdue’s preparation is underway during a short week that has them facing the Minnesota Golden Gophers Friday night at 7:30 PM Eastern. With a lack

Purdue Comes Up Short Against Northwestern

In a battle for dominance atop the Big Ten West, Northwestern edged out Purdue on Saturday at Ross-Ade Stadium in West Lafayette 27-20. The Wildcats 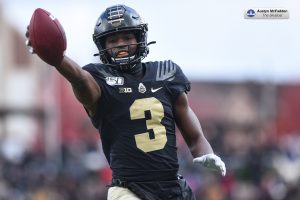 The Purdue Boilermakers start their 2020 season after much debate within the Big Ten regarding whether to play or not, tomorrow at 3:30 PM EST