TALLADEGA, AL- Rookie driver Raphael Lessard in the No. 4 KBM Motorsports Toyota scored his first career win on Saturday in the Chevy Silverado 250 at Talladega Superspeedway. A caution ended the race on the final lap after a wild day at the track.

Austin Hill in the No. 16 led the NASCAR Gander Outdoors and RV Truck series to the drop of the green flag and lost that lead to Sheldon Creed in the No. 2 after just one lap. After Creed led for four laps, Hill regained the lead.

On lap 9, the No. 98 of Grant Enfinger had his left rear tire go down just ahead of pit road. This forced him to have to cautiously make his way around the 2.5-mile tri-oval and into the pits and put him two laps down. However, as he pulled out of the pits, carnage ensued in turns three and four with the lead pack.

The caution was a chain reaction from the front of the pack as Creed tried to make a block on Hill, but didn’t have the room and got slightly hooked, causing a chain reaction behind them and leading to a multiple truck wreck. Creed saved his ride, and Christian Eckes assumed the lead with Hill in second. The incident took out last season’s winner Spencer Boyd in the No. 20.

The number of trucks involved forced the red flag to come out momentarily. The field went back green with two laps left in the stage, and Eckes was leading the field. Creed, on the inside lane, worked his way back to the lead with one to go in the stage. However, the outside lane’s momentum picked up on the stage’s final lap to see Austin Hill snag the stage win and the points bonus.

The green flag dropped on lap 25 to get the 2nd stage underway with Derek Kraus leading the pack. He would lead the field until lap 36 when Gus Dean in the No. 56 made heavy contact with the inside wall coming out of turn four. The cause was his line getting cut off by Tanner Gray in the No. 15 as they made their way through turn four. Kraus was still scored as the leader as the caution flew.

Kraus was then scored the stage two winner as the cars passed the start-finish line under caution on lap 40. Enfinger would get one of his two laps back, catching the lucky dog. When the field went back green for the final stage, it was Brett Moffitt in the No. 23 leading the field on the outside lane with Creed on the inside. Moffitt would maintain control as the front pack moved into a single file.

Then on lap 48, the caution would fly again as Todd Gilliland’s No. 38 machine blew an engine, causing a checkup chain reaction. Then behind him, two trucks back, Gray lost control of his No. 15 machine and went sailing into the inside wall on the backstretch coming out of turn two.

With 41 laps to go, the field went back green with Moffitt leading the pack on the outside, with his teammate Creed inside. Creed let up a little bit on the restart so Moffitt and his No. 23 machine could pull in front of him, and they kept it rolling. Then with 39 laps to go, it was Johnny Sauter taking the lead away. This was after Moffitt tried top block but got caught in the middle lane, losing some positions.

Hill would start the cycle of green-flag stops on lap 30 with Sauter still leading. However, Hill picked up a speeding penalty, which would put a damper on his afternoon.

Things stayed pretty simmer until there were only six laps to go. That’s when Creed blew a right rear tire while leading, and the carcass remained on the track. This put Stewart Friesen to the lead as the caution came out.

The field went back green with two laps to go, and Friesen held the lead with one to go. Then on the final lap, all chaos broke out, as Friesen got loose and started to fall back. He then got clipped and went for a spin on the backstretch. Hill was caught up in the mess, and his truck came to a stall in the inside wall just out of turn four, where it went up in smoke.

As the race went final when the caution came out, the rookie driver from KBM Motorsports, Raphael Lessard, was the leader in the No. 4. Trevor Bayne in the No. 45 was scored second. 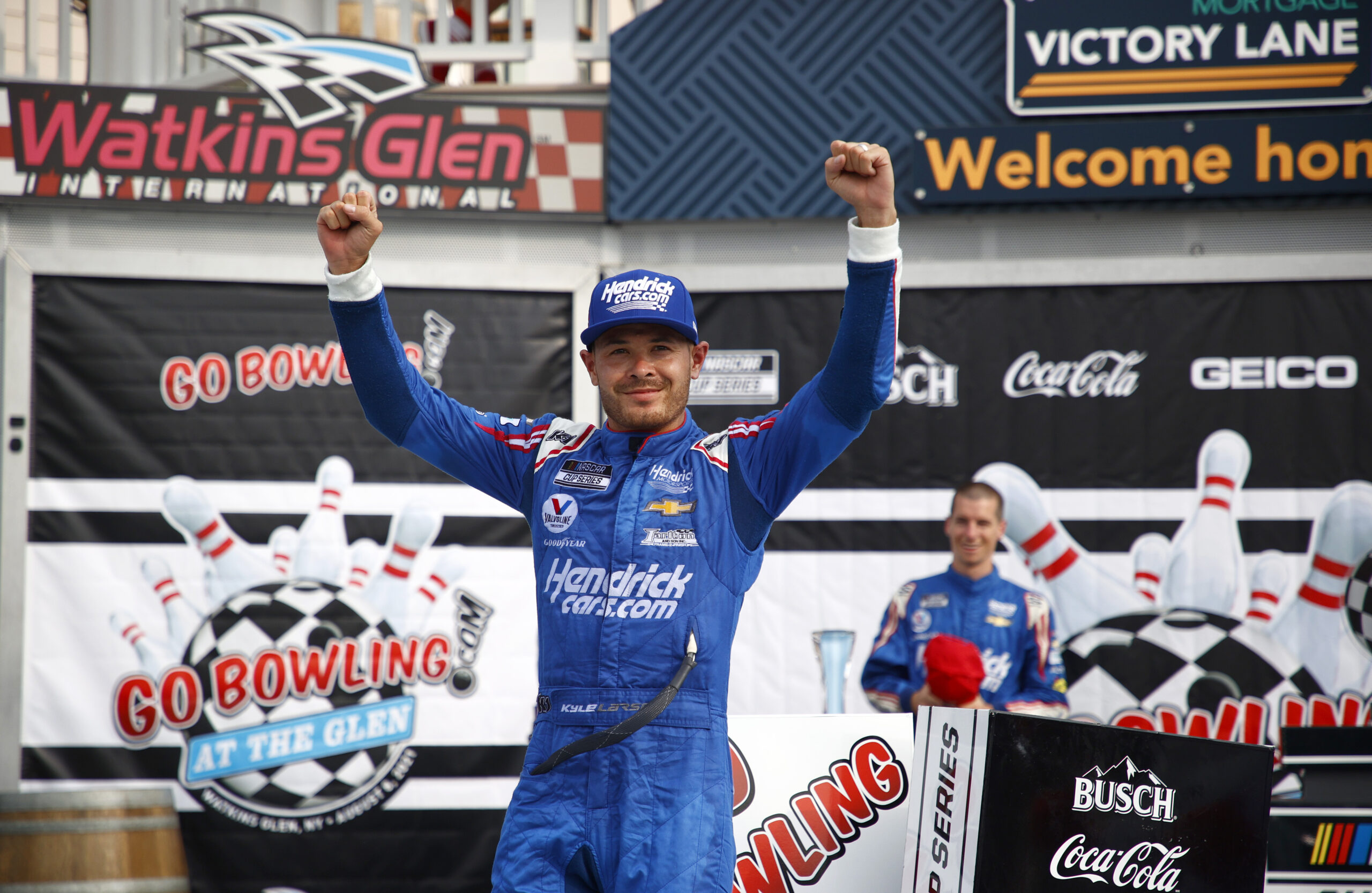 After 26 races, the 2021 NASCAR Playoffs begin tonight at Darlington Raceway (6 PM EDT on NBCSN). The consensus favorite is none other than Kyle 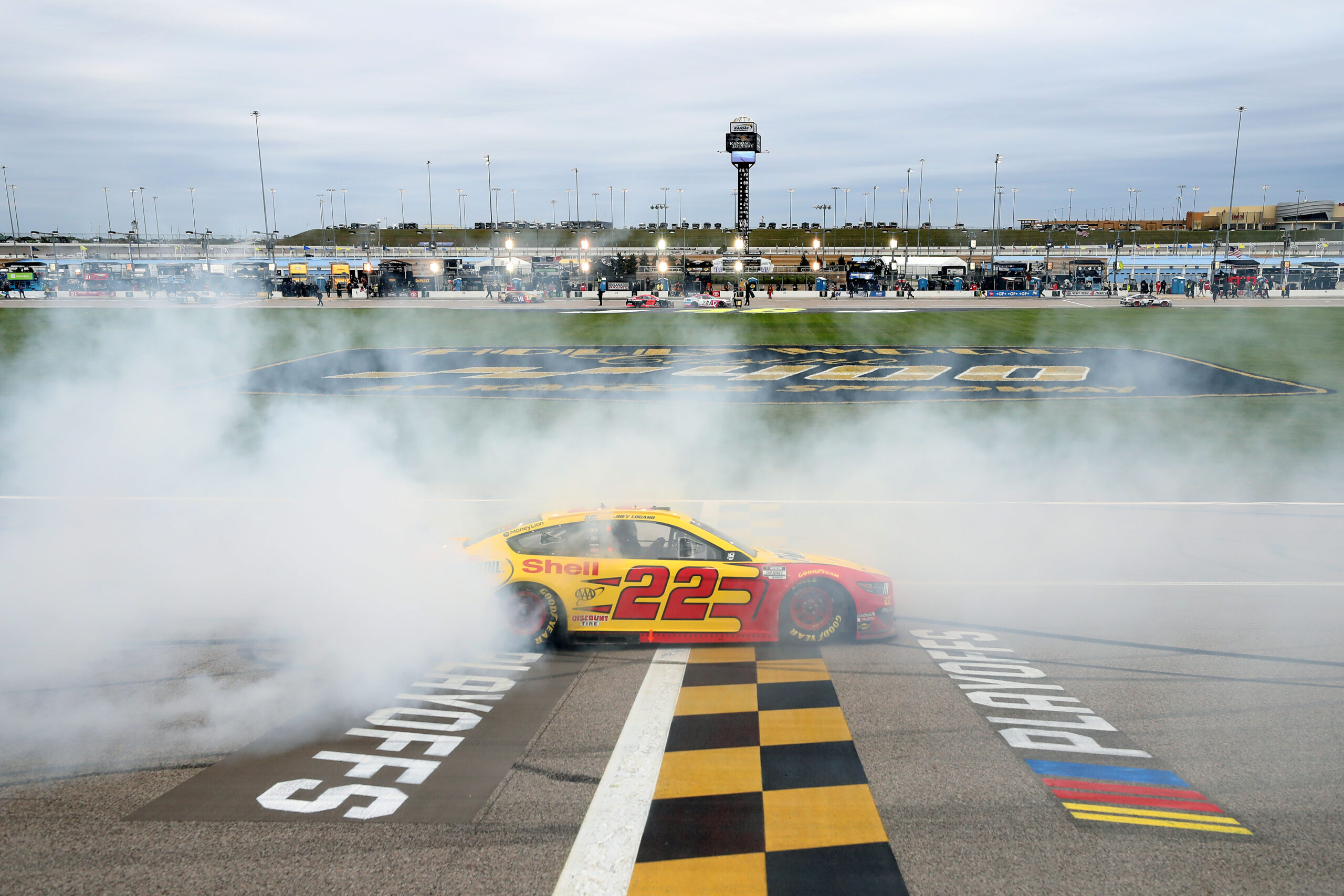 Joey Logano became the first Cup Series driver to punch his ticket to Phoenix in 2020 by winning at Kansas Speedway on Sunday afternoon. “You’ve